Writing is like driving at night in the fog.
You can only see as far as your headlights, but you can make the whole trip that way.
– E. L. Doctorow

Did you write yesterday? Half of the year is in our rear-view mirror, and I am drawing a line in the sand. The targets I missed, the stories I didn’t compose, they no longer matter. These last six months are history. Done. I won’t lie, 2020 kicked me in the head, leaving me stunned, unsteady, and incapable of completing anything beyond basic tasks. I bet I am not alone, but don’t count me out yet. They say what doesn’t kill us makes us stronger, right? I am confident I will discover I am more capable than I have ever been. I dug deep, reevaluated my annual goals, and I decided…

Contemplating a new project is exhilarating. Excitement runs high as we envision the joy and satisfaction we expect from a completed task. The pros far outweigh the cons, there is no question we should proceed. So why do we become experts at delaying? We know what it requires, the essential steps, but we procrastinate, we wait, we opt to pursue less productive activities.

Whether we fear failure, dread increased responsibility based on our success, or find ourselves paralyzed by the desire for perfection, we need an answer. We must tapinto our passion and enthusiasm. Do you remember that feeling?

Procrastination lives in our heads, and the fastest way to dispel it is to move. Exercise, take a walk, spend time with optimistic people, get your blood flowing, and feel it coursing through your body. Then channel those emotions and start your work.

How do you find your magic?

He was intolerant, stubborn and stagnant;

Until he realised his views were all vacant.

He was a believer of blind prejudice;

Until he realised that it is all sheer injustice.

He used to discriminate against and abuse others,

Until he realised that he has no one to stand for him as a brother.

He used to hate the impoverished and ugly;

Until he realised it was him who was poor, repulsive and guilty.

He craved for approval and often felt dejected;

Until he realised that heroes grow mightier after being rejected.

He groaned at a symptom of a malady like a hypochondriac;

Until he realised that his will and science can do best for his comeback.

He thought that war and violence were natural;

Until he found it was easier to stay with others as a pal.

He stopped asking questions taking things are just what they are;

Inspired by watching huge crowds on Southern California beaches during the Covid-19 pandemic without wearing masks and not social distancing and listening to them loudly claim that they have a constitutional right not to wear a mask.  Refusing to learn or believe in scientific facts that prove how to keep from spreading Covid-19.

Or put in a more logical context they believe that their right not
to wear a mask is more important than society’s right to protect everyone else
from them spreading Covid-19 to others!

News flash – individual rights “sometimes” have to yield to the protection
and welfare of the general public in extraordinary and emergency situations.  This is the reason the government has been given “The Police Power” – to protect the many from the few when life and health is in danger!!!

The Word of the Day is ‘Codswallop”.

Write a Poem, story or anecdote, inspired by this word.

Please create a ping-back to your post by including a link to this page in whatever format you are using to post.  Not sure how to do that?

See how to create ping-backs here.

Most Importantly, Have Fun!   🙂 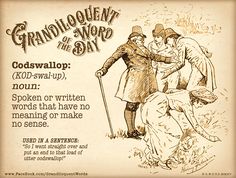